It has become tradition that at Easter I bake something creme egg related. Previously I’ve made cupcakes and brownies and this year I have created creme egg millionaire’s shortbread. These sweet bites have a homemade creme egg filling, instead of caramel, and a chocolate topping covered with mini creme eggs.

These biscuits aren’t too complicated to make but they need to be made in stages so will take a while to make. This is mostly waiting for the fillings to cool and set so it looks more impressive before you eat it. It’s also incredibly decadent but creme eggs are only around for a few weeks a year. 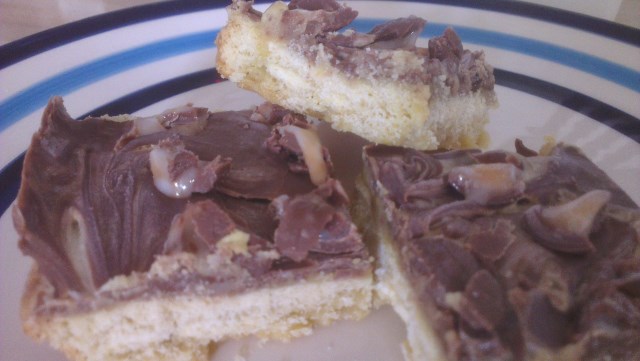 This amount of mixture will make roughly 20 biscuits and I was using a 30 cm by 25cm tray.

To make the creme egg filling:
2 tablespoons of butter
190g of icing sugar
60ml of golden syrup
A tablespoon of milk (if needed)
Half a teaspoon of vanilla essence
A pinch of salt
A few drops of yellow food colouring

For the chocolate topping:
200g of milk chocolate
Some creme eggs to decorate — the mini ones are best

Start off by making shortbread, this is the base for the biscuit and is the only bit of baking that needs to be done. You can use a food processor for this bit, it won’t be as messy and quicker than doing it by hand.

First crumb the flour and the butter until you get something that looks like breadcrumbs. Then mix in the sugar and the cornflour until it all comes together in a ball of dough. 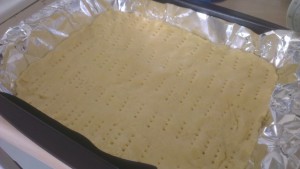 Now you need to wrap the dough in clingfilm and leave in the fridge for about half an hour. This will allow the dough to firm up a bit and become easier to mold and shape.

After it has chilled remove from the fridge and place in a lined tray. Pat the dough down until the bottom of the tray is completely covered and it looks roughly equal. Pierce the dough with a fork to stop the shortbread from rising. Put in the oven for 30-40 minutes at 170C until the shortbread is golden.

Leave the shortbread to cool while making the creme egg filling. It is tempting to buy a lot of creme eggs and just spoon out the filling but it is easier to make your own. Beat together butter and icing sugar until you have butter icing. Next add the golden syrup, vanilla and a pinch of salt and mix. If you think at this point you need it to be liquid like add a tablespoon of milk. 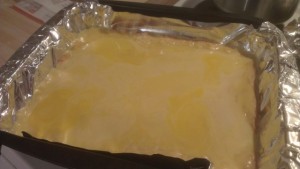 When the white filling has set remove from the fridge and pour over the yellow part of the creme egg filling. Try and marble it so it looks more like eggs. Then leave the completed filling to set in the fridge for a couple of hours. If it isn’t setting quickly put it in the freezer for half an hour.

The final layer of the millionaire’s shortbread is the chocolate. Melt the chocolate and leave it to cool, it still needs to be melted but if it is very hot it could melt the creme egg layer. Pour the chocolate and spread to cover the top. Then take some mini creme eggs, unwrap them and break them up. Decorate the top layer of chocolate with the eggs and leave in the fridge to set. 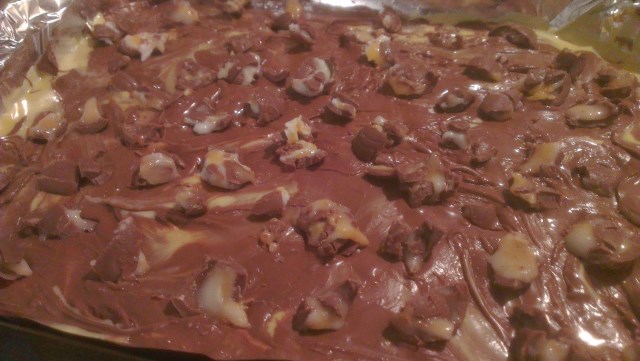 And here’s the finished shortbread. 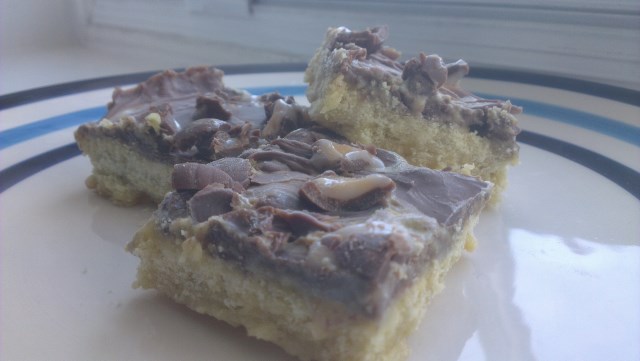 Chop the shortbread into about 20 squares and enjoy it sometime over the Easter break. If you do try it let me know you think. Or if you fancy trying something else creme egg related have a read of my cupcake and brownie recipes below. 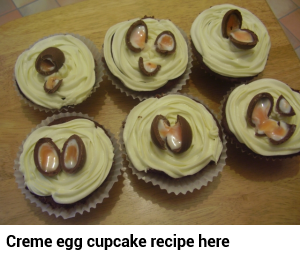 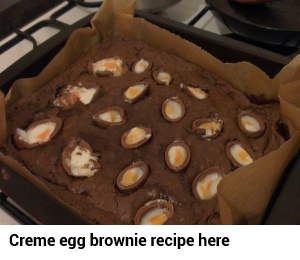