“The one positive that’s come out of this, its highlighted the fact that we really need to understand what we’re eating and sadly nowadays we’re becoming a nation of convenience and convenience food and we don’t really care where stuff comes from.

“When stuff gets highlighted like this … now we’re worried about it.”

One of Lincoln’s fish and chip shops, the Burton Road Chippy, put themselves forward to compete for the best fish and chip shop restaurant in the UK. This was their first time in the competition and after qualification, mystery shoppers and impressing the judges they made it into the top 10. The winner would be announced at an awards ceremony in London. 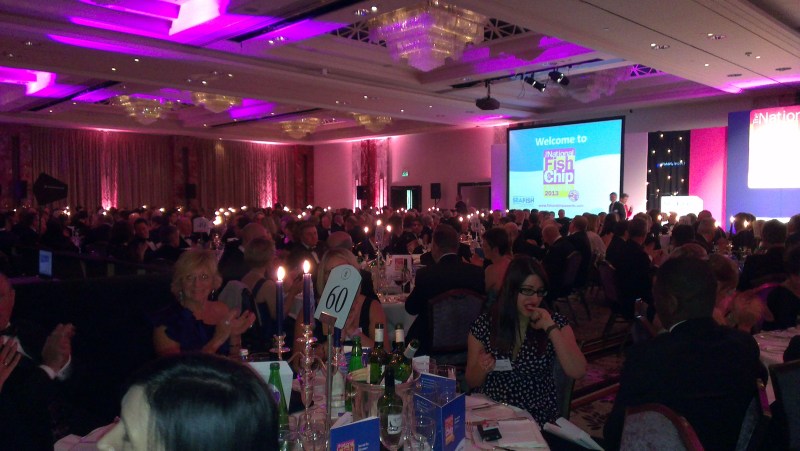 In this documentary I follow the owners, Des Anastasiou and Lesley Graves from a week before the results were announced. In the run up to the awards ceremony I met up with Des to find out how he was preparing for the awards ceremony and what it had been like to get to this stage.

You can listen to my special documentary ‘And the winner is…’ here:

The Burton Road Chippy, who tweet their customers regularly, kept them informed about their time in London.

well… off to London later today ready for the Finals of the National fish and chip awards. 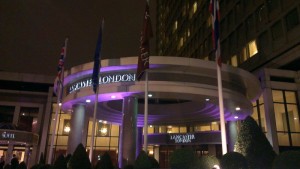 The awards ceremony was held at the London Lancaster Hotel and hosted by comedian and impressionist Rory Bremner.

These awards were the 25th of their kind and as one of the judges, Mick Bacon who works for Seafish, said it is a good chance for the restaurant owners to relax.

The night began by celebrating all 10 nominations for the best fish and chip restaurants by giving out the awards and with a video of all the finalists in their restaurants.

The first award of the night was the Fish and Chip Feast Fundraiser Award which the Burton Road Chippy won. The category was sponsored by the charity Seafarers UK who look after sailors and their families.

Throughout the night there were a number of awards all to celebrate the best young frier, contributions to the local community and recognition for staff training. 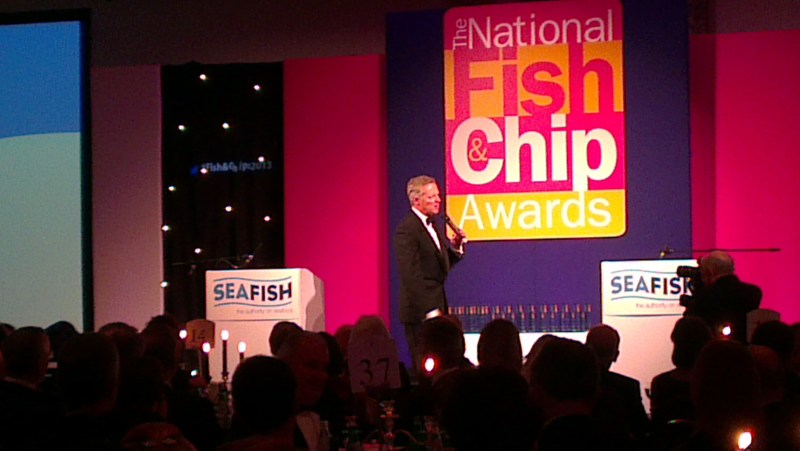 Sadly the Burton Road Chippy haven’t won independent fish and chip shop of the year. But they still won an award for their fundraising.

After the awards Lesley said she is proud of her team and their achievements and said they are still winners. She also said that they would be running in the competition again next time.

So see you all next year.

This documentary was created as part of my university degree. It is intended for young teenagers in Lincolnshire who might be learning about the census at school.

It may only be 40 questions that need to be answered every 10 years, but what is the census for?

Follow me as I start filling in my census and discover how the 10 year event is organised, how the answers from the forms are used to find out which parts of the country need more money and how important this document ends up being when people want to look into their family history.

Along the way it is revealed which famous Lincolnshire people are on the census and find out why the idea of people putting their religion as the Star Wars faith Jedi in a bid to make it a real religion was never going to work, as well as how the census may be forgotten about by the public after it has been sent back but 2021 census forms are already being prepared.

I also delve into the Lincolnshire Archives as they launch a new website called Lincs to the Past. It is a new way to publish their records online that are hidden away in the archives, museums and libraries and make them easily accessible.

Listen to the interview with Karl McCartney in full:

Lincoln’s MP Karl McCartney said he did not fear a student backlash when he decided to vote with the government to raise the cap on tuition fees to £9,000.

Even though the MP represents a city with two universities, he says he did not worry about voting against the views of students – saying that he would not “be scared in to voting a different way”.

He added: “I would hope [by the next general election] they would see that I’ve voted in the best interest of the city that I represent.

“I represent all the people in Lincoln… It’s not right that students should expect taxpayers who are taking the economic hits [to pay for their education].”

The vote, which took place in parliament on December 9th, saw 323 MPs vote in favour of raising fees to a maximum of £9,000 and 302 MPs voted against.

McCartney says that he is confident that Lincoln will not be affected by changed to the funding of higher education: “I know how important the university and the college is to Lincoln and the city and to the wellbeing of the city… I’m well aware of the benefits that Lincoln as a city has through having the educational institutions in the city and I wouldn’t like to see that harmed in any way and I don’t think this is.”

However, a report in to the funding changes by the University and College Union (UCU) highlighted the University of Lincoln as being “high risk” and Bishop Grosseteste as “very high risk” saying they would “struggle to survive” along with 47 other universities across England.

Professor Scott Davidson, Deputy Vice Chancellor at the University of Lincoln, rejected this view and declared the report “inaccurate and unhelpful”, saying that the Higher Education Funding Council for England (HEFCE) have said “Lincoln was doing everything right and that we are one of the sounder institutions they are working with”.

Listen to the interview with Professor Scott Davidson in full:

Professor Davidson said that the University of Lincoln has had a “consistent stance” about not being in agreement with a rise in tuition fees and is disappointed “that this is a step that the government has seen fit to take”.

Professor Davidson stressed that the University would continue to provide a teaching and learning experience for students, continue to be good employers for our staff, as well continue their commitment to research and keep the investors happy.

The Deputy Vice Chancellor was pleased that McCartney had hope for the future of the university and said that the local MP voting for the rise in tuition fees was a matter of “personal determination” and he recognised that “to be a government rebel is not particularly healthy if you’ve got ambitions within a particular party”.

There have been a number of protests from students and union members which culminated in around 20 people deciding to occupy a room in the University of Lincoln’s Main Admin Building on Wednesday, December 8th.

After hearing the result the group were shocked and have decided to occupy the seminar room indefinitely.

The University has been supportive of their decision to protest and just want to make sure that timetables for other students are not disrupted.

Professor Davidson has sympathises with the protesting students saying: “I’ll think you’ll find quite a lot of the staff at the University were themselves in the 60s and 70s involved in similar kinds of activities.

“We are quite happy to see students exercise their democratic right to protest in this way and I have to say the students who have been in occupation in the Main Administration Building have behaved in an exemplary way, they are making their point extremely well and we are very happy for them to be able to do that.”

According to the media we have no jobs and no future to look forward to. Mark Winter, a graphic designer, found himself in this position when he was made redundant. However, instead of sending CVs to anyone and everyone or popping down to the local Job Centre, Mark turned to Facebook.

As the group “The Employment of Mark J Winter” says: “Facebook has done some wonderful things for people: It’s helped beat X Factor to Christmas number one. It’s caught criminals. It’s even helping to solve world hunger (Thought I’d made that last one up. Googled it. Fact),” so why can’t it help with unemployment as well?

Mark didn’t think in all honesty Facebook would help, calling the idea “a bit of a dream”, especially as the idea hit him during the night: “I can’t really explain how I came up with the Facebook campaign. I have a lot of sparks of creativity that usually hit when I’m lying in bed, singing to myself or in the shower. This particular idea was a 1am ‘Why not?’ bed idea.”

On top of using Facebook and Twitter, Mark added an incentive to the campaign: “I realised that the average person probably wouldn’t do any favours for strangers unless they can get something in return.

“The 10% of a month’s wages seemed the best idea as it kept a nice link between me and the potential winner. The better the pay offered the greater the 10%. It’s kind of ‘the more you help, the more you benefit’.”

Mark said that “the story of my unemployment is fairly long” and involves working as a junior graphic designer for a property consultant in Mayfair for 13 months, until he was made redundant due to the recession: “It was a shame as I felt I’d come a long way and had much more to offer, but it just wasn’t to be.”

To tide him over Mark worked on and off in a secondary school for two years, until January 2010 when he started a course in Shillington College: “This was ideal for me as it offered an intense three months of learning that gave you a portfolio at the end.”

Once the course was completed he returned to help out at the secondary school but then the summer holidays came around, meaning the job hunt had to begin again.

So it must come as relief that the idea was not as crazy and ambitious as it seems, as within a short amount of time there has been positive feedback: “So far I’ve got some fantastic responses from people. In less than a week on Facebook I had 50 people following me. In a matter of days on Twitter I’d far surpassed that.

“I’ve had designers from all over the world, [places such as] USA, France and Brazil, congratulating me on the idea and wishing me luck. I’ve also had some great leads to jobs as well. In one day I was linked to nearly a dozen jobs whereas it could take me days to find that many ideal jobs.”

One of the hard things though was what to expect from his nearest and dearest, especially his Mum: “At first I was reluctant to tell my Mum about the campaign, I’m not too sure why. I suppose I thought she’d think it was time wasted that could be spent looking for jobs.

“To be honest, everyone has been great. Although I did have a couple of jokes likening me to a call girl you’d find in a telephone box. I see the funny side of it all though.”