At the beginning of the month Caitlin Moran released her first novel called How to Build a Girl. I felt a bit strange reading it because even if I wanted to change who I was as a teenager it’s a bit too late now, but there was enough to enjoy regardless. I will also admit that I can’t write a better review of the book than John Crace’s digested read in the Guardian which gets to the crux of the problems with the book.

The main character Johanna Morrigan lives with her large family in Wolverhampton doing the usual teenage things, but after winning a poetry competition and embarrassing herself on local TV with an impression of Scooby Doo she decides to reinvent herself. She gets interested in music, goth culture and changes her name. She’s also really interested in boys but there’s no boys willing to help her find out more about sex so Johanna spends a lot of romantic time with herself. A lot of time. She moves on from writing poems to writing music reviews for a national magazine. This career feat gives her the opportunity to become a lady sex adventurer. This is Moran’s rebuttal to the Fifty Shades of Grey phenomena, but I think it works best as a chance to explain to young people what sex is actually about, the precautions needed to make it fun (there’s a chapter about coping with cystitis where every word made me wince) and how it isn’t always romantic.

Eventually Johanna realises she needs to allow herself to actually be a teenager, but by this point I think the rest of her family are more interesting. They all seem to struggle so that Johanna can have what she wants, this includes having their benefits reduced as she’s earning now but continue to lovingly support her.

The strangest thing is Caitlin Moran says the book is not autobiographical, there’s even an opening page to explain that, but there’s a lot of similarities to her career and moments in her life that she’s spoken about in How to be a Woman. All of her stories tend to involve a huge family in Wolverhampton with the main female character doing something different, if that was the case then Caitlin Moran wouldn’t be so different to everyone else. I really enjoyed reading it but it didn’t have the impact I was expecting. This could be that I’m too old for the book, or I grew up agreeing with a lot of these values. Mostly I think it didn’t hit the same stride as How to be a Woman, whether that was because it was fiction or something else, but I would recommend How to be a Woman over this book.

Last month Monty Python performed on stage for the last time at the O2, so as well as watching old shows, documentaries about the group I decided to read Michael Palin’s diaries of The Python Years. This first volume covers 1969 to 1979 which goes from Python getting established to the controversy surrounding the release of the Life of Brian.

It was interesting to see how the team worked together, and there would usually be squabbles and at several points it seems Monty Python was on the verge of splitting up. Then they get together to write something, have a pleasant chat and everything seems happy again. He also writes very honestly about his family, and makes no apologies that his diary entries sometimes miss a momentous piece of Python news for sharing a day out with his family instead.

Personally the best bit in the diaries was when Palin met Brian Winston, who is an instantly recognisable name for anyone who’s been to the Lincoln School of Journalism. 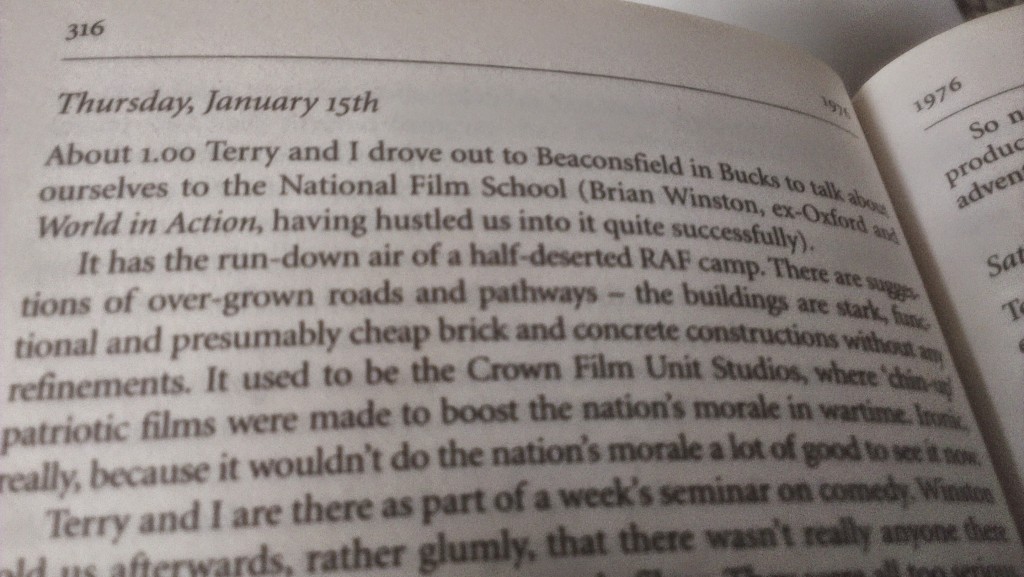 Jeremy Paxman’s Great Britain’s Great War was a fascinating read, after studying history I knew a lot of the main events of the first World War but Paxman has lots of anecdotes from the time. He wanted to challenge the perception that the generals just sat back and got a lot of things wrong which meant a lot of young men died, and show that the approach to war and fighting was changing. However, I think the best parts of the book was dealing with the emotional side effects of war. The chapter detailing how families dealt with missing men after the war was particularly touching, especially how the public reacted to the tomb for the unknown soldier.

While Paxman’s book is a good for those wanting to start finding out more about the war, Mary Beard’s Confronting the Classics is a little bit more advanced than I was anticipating. It deals with the way Ancient Greek and Roman history has been collected, from the sounds of it mostly by people with little understanding of the Greek language or a bit too keen to make places into tourist destinations. For my A levels I studied Classical Civilisation and thought that would help with the book, but I largely studied Ancient Greece, buildings and the prose whereas Mary Beard’s book is mostly about the Romans. This just means it’s more of a challenging read and I hope it gets me reading more about the subject.

After reading about the war, feminism and classical civilisations I fancy some easier reads this month. I’m tempted to read the Hitchhiker’s Guide to the Galaxy because it’s fantastic and I haven’t read any of the books since I was a teenager. My brother is also very good at finding cheap yet good books for the Kindle and found me Where do comedians go when they die? A journey of stand up by Milton Jones for 99p. Maybe a light-hearted classic as well, we’ll see what I fancy on some of the long train journeys I have this month.